Discover the masterpiece of prehistory

The cave of Lascaux is located in the Périgord in the Dordogne department in the southwest of France. A guided tour of Lascaux is an essential part of your stay in the Dordogne Valley. It is the masterpiece of prehistory. This priceless treasure, classified as a World Heritage Site by UNESCO, will transport you a few millennia back in time to discover the beginnings of life on Earth.

A tour of the Lascaux cave replica

The Lascaux cave located in the commune of Montignac-Lascaux in the Dordogne department in the Vézère valley is one of the most important decorated caves of the Upper Paleolithic by the number and the aesthetic quality of its works. It is sometimes called “the Sistine Chapel of cave art”. It was discovered in 1940 by 4 local teenagers who discovered what they thought was just a hole in the hill of Lascaux, they then decided to enlarge it and came face to face with these paintings made by our Cro-Magnon ancestors.

Today the original cave is closed to the public in order to preserve this site which is listed as a World Heritage Site by the UNSECO. However, in order to allow everyone to admire the masterpieces of prehistory, a reconstruction of the Lascaux site has been made.
Get ready to go back in time by diving into the heart of the almost complete replica of the cave thanks to Lascaux IV and its 3D digital tour.

Visit Rocamadour, its buildings, overlooked by a 14th-century castle, rise in stages above the gorge of the Alzou River. 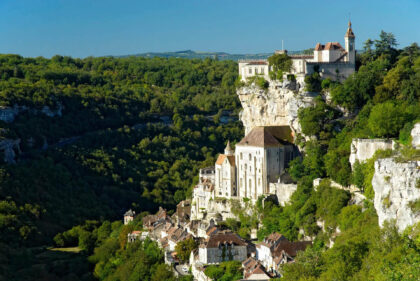 A day of discovery in the heart of the city of Sarlat to combine historical heritage and local gastronomy. La Roque-Gageac offers unique landscapes and architectural scenery that you can discover on board a gabare along the Dordogne. 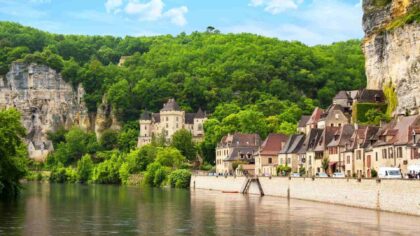 Go back in time with a visit to this ancient medieval town, classified as one of the Most Beautiful Villages in France. 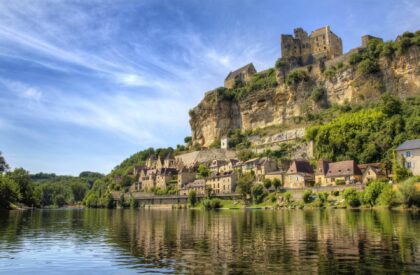 Discover the most famous sweet white wine in the world with a visit to the Château de Monbazillac and a tasting of their wines.