We provide a variety of options to meet your needs, if you can’t quite find what you’re looking for, please contact us and we’ll create a tailor made trip that is truly just perfect for you.


This stay is available all year round.
Subject to availability at time of booking.

Toulouse and the Canal du Midi on the way to Carcassonne

In the morning, visit the historic center of Toulouse to discover its main monuments and key places, a guided tour that will give you a good overview of the pink city and its history in 1h30 / 2h. The docks of the Daurade on the banks of the Garonne, the Pont Saint Pierre with a breathtaking view of the Dome of the hospital La Grave and the opening on the Brienne canal; the convent of the Jacobins built in the XIII century following the crusade against the Cathars, the Capitol Square witnessed a time when the Capitouls ruled the city, not to mention the town hall and its superb Hall of Illustrious; the magnificent Saint Sernin Basilica, built in the 11th century in brick and stone, which is listed as a UNESCO World Heritage Site.

Lunch in a traditional restaurant where they serve the best Cassoulet nearby Castelnaudary.

Stop at Castelnaudary to see the Canal du Midi « Grand Bassin » and the St Roch lock, a listed as a UNESCO World Heritage site. Drop off at your hotel in Carcassonne.

In the morning we discover the Castles of Lastours with breathtaking views from the belvedere. Then we hike through the valley to discover these structures one by one…They sit on a rocky spur above the village of Lastours, isolated by the deep valleys of the Orbiel and Gresilhou rivers.

We will take lunch in a local pretty village in a traditional french restaurant.

In the afternoon visit the Cité de Carcassonne, an Unesco World Heritage listed walled city. A medieval fortress settlement with a history that exceeds two and a half thousand years with picturesque fortifications, over 3 km of walls with 52 towers. La Cité is a stunning and unique place to visit. Strolling through the medieval village with its tiny and twisted alleys The medieval charm and detail of this ancient city transports you back in time and impresses you at every corner.

In the morning, we go to Gruissan, then we visit Narbonne city, that has crossed all ages for more than two millennia. You will discover this remarkable heritage by walking along the streets of the city center as well as the discovery of the immense cathedral St Just and Saint Pasteur.

Stroll freely in the beautiful market halls of Narbonne where every morning, local people are going for their daily shopping. You will find excellent local products there.

In the afternoon, we will drive to the beautiful and picturesque village of Minerve (1hr driving) classified as one of the “most beautiful villages of France”. The fortified medieval village, is perched on a naturally defended rocky peninsula high above a canyon in the barren Languedoc landscape

We leave in the morning to visit these two amazing ruined castles…. We start with Quéribus Castle, also called citadelle du vertige, which, as it’s name suggests will offer you a wonderful view, literally breathtaking. During the Cathar crusade, Queribus served as a shelter to the cathars. This is sometimes regarded as the last cathar stronghold, in a sense it was.

We take lunch in the pretty village of Cucugnan. After lunch, take the time to stroll through the medieval streets of this picturesque village and go to the windmill where you will be surrounded by vineyards.

We then head onto Peyrepertuse Castle, a ruined fortress and one of the Cathar castles. It was associated with the Counts of Barcelona and later the kings of Aragon. The name Peyrepetuse is derived from Peirapertusa, the Occitan word meaning pierced rock.

Our first stop is Mirepoix, a beautiful medieval village dating from the 10th century. The large central square is flanked by a magnificent covered arcade, created by half timbered houses supported on wooden pillars.

We then drive to the Château de Montségur, where the last stake of the Crusade against the Cathars occurred in the 13th century. We then spend a relaxing lunch, enjoying the local cuisine.

Next stop is for a relaxing Wine tasting, after a full visit of the winery and an explanation of vine pruning and growing methods, you will have the opportunity to taste these fresh and elegant wines, cultivated with passion.

Lagrasse, named as one of the most beautiful villages of france. In the valley of the River Orbieu, Lagrasse sits in the foothills of the Pyrenees in a region renowned for its wine production in the surrounding hills, the Corbières.

Lagrasse is an attractive village, with an Abbey – permission for its construction was given by Charlemagne in 783.

The two highlights of the village are the Abbey and the bridges, although the narrow medieval streets of the village itself are also very attractive and the remains of the town walls can still be seen.

Lunch in a restaurant in Lagrasse itself.

In the begenning of the afternoon we head for the Fontfroide Abbey where you can explore at your leisure with an audio guide. One of the best preserved Cistercian monuments in France, Fontfroide Abbey was founded in 1093 on land given to some Benedictine monks by the Vicomte de Narbonne.

In the morning we head for the city of Albi, a newly declared World Heritage Site by UNESCO. Among the buildings of the town is the Saint Cecilia cathedral, a masterpiece of Southern Gothic architecture, built between the 13th and 15th centuries characterized by a strong contrast between its austere, defensive exterior and its sumptuous interior decoration.

Lunch in a restaurant.

In the afternoon, we visit Cordes sur Ciel. The steep ascent transports you back to medieval times, past the porches, battlements, sculpted facades of the Grand Ecuyer and the Grand Veneur and the splendid 18th century Gothic mansions that belonged to wealthy traders. The narrow winding alleyways up to city are also peppered with galleries and craft shops. Painters, writers, ceramicists, sculptors and jewelers were drawn to this inspiring place many years ago and the tradition continues. On misty mornings, Cordes sur ciel truly lives up to its name as it seems to float in the sky.

This offer does not includes : 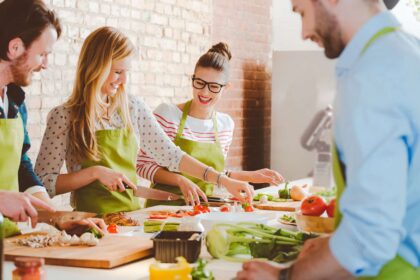